What is a Yield Curve Inversion?

A yield curve plots the interest rates of bonds with different maturity dates. In a healthy economy, the longer a bond takes to reach maturity, the higher the yield. A yield curve inversion occurs when short term bonds show the higher yield.

Simply put, an inversion occurs when a 2 year bond pays a higher interest rate than a 10 year bond. A yield curve slopes up or stays flat. When the yield curve inverts, it trends downward. It’s sometimes referred to as a negative yield curve.

It’s considered a prelude to a recession. The curve is a visualization of investor expectations. When the curve is negative, investors expect long term interest rates to fall.

Because an inversion is so rare, it’s considered a red flag. Coverage by the financial press is immediate, but mainstream media is quick to follow. An inverted curve is a prelude to a recession. It’s a visualization of investor expectation. They are anticipating long term interest rates will fall.

How the Yield Curve Works

The yield curve tracks interest rates of marketable securities. The bills, notes and bonds have the value but different maturity dates. According to Investopedia, “The most frequently reported yield curve compares the three-month, two-year, five-year, 10-year and 30-year U.S. Treasury debt.” The purpose of the yield curve is to provide investors with data on the status of the economy.

When the yield curve is flat, it indicates a time of economic transition. The flat curve can represent a downfall or a recovery. It means that short and long term securities have the same yield.

Treasury bills, notes and bonds are fixed-income investment. The government guarantees them, making treasuries a very safe investment. That low risk doesn’t come without a price – the fixed rate interest on treasuries is quite low.

There are multiple types of bills and bonds. The primary difference is the amount of time it takes for the asset to mature:

The treasury also issues a special bond that adjusts its value with inflation. The interest rate stays the same, but the yield adjusts for inflation. They’re called Treasury Inflation Protected Securities (TIPS.) They adjust in response to inflation or deflation in the economy. The Consumer Point Index (CPI) is the variable.

The issuer pays interest every 6 months on bonds and notes. Interest on bills comes once they mature.

The U.S. Treasury sells marketable securities – bond, bills and notes. The protocol for purchasing is an auction process. Auctions are open to individuals, corporations, trusts or trusts, and financial institutions.

A competitive bid is different. It allows the investor to specify the rate, yield, or discount margin they will accept. Competitive bidding is done by experienced institutional investors.

Like every other industry, the bond market has it’s jargon. Here’s a brief glossary to save you from having to Google.

How is the Yield Curve Calculated?

It’s calculated by the U.S. Department of the Treasury. Their methodology can be found here, but you may need an MBA to get through it.

Treasury pulls the data every day to show the yield rates. Bloomberg also shows a daily table view in a simple format.

The chart below from Statista demonstrates the daily output in in a yield curve. 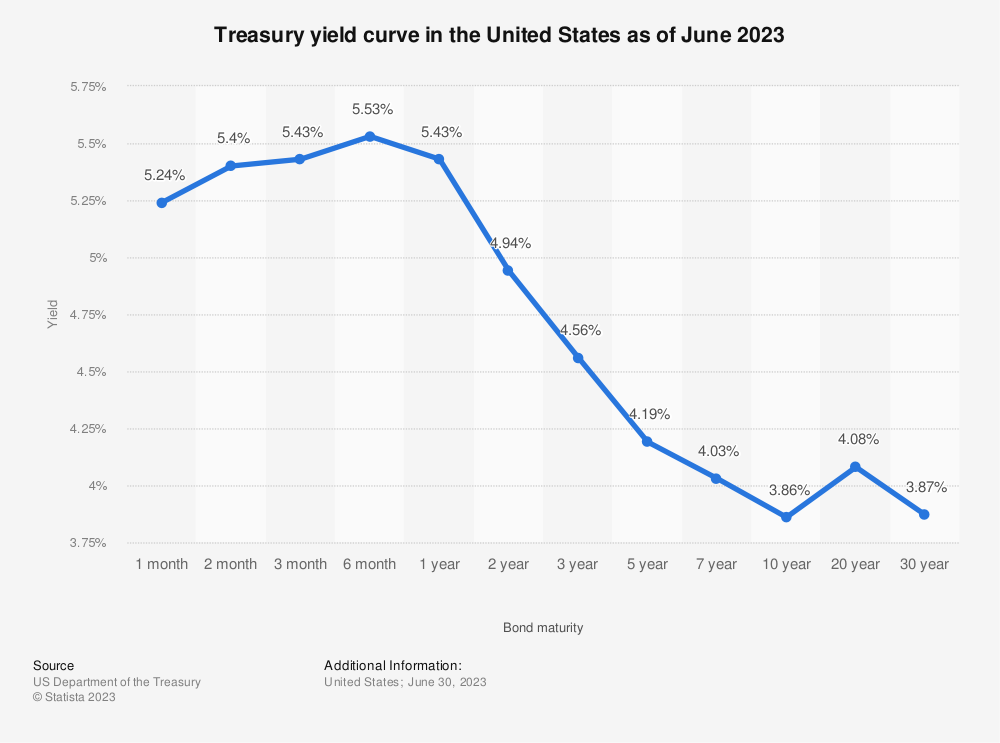 Signs of a Recession

A yield curve inversion represents a loss of faith in long term investments. A negative yield curve implies investors anticipate a downturn in the economy. This has an impact on markets far beyond treasuries. If you invest in the stock market or buy junk bonds – brace for impact.

Does a yield curve inversion always mean a recession?

All 10 recessions since 1950 followed a negative yield curve. There are only two times when the curve inverted but there was no recession.

In August 2019, when the curve inverted again, investors hoped it was another false flag. The trade war with China was the justification. The inversion was brief and forgotten.

In January 2020, there were two yield curve inversions. Then the coronavirus roiled the markets. The stock market plunged, wiping out gains from the entire year. In May 2020, it was announced that we entered a recession in February.

What happens to bonds during a recession?

Bonds are slices of government (or corporate) debt. When investors buy bonds, they are loaning the issuer money for a set period of time, i.e., 10 years. The full sum of the principle is returned when the bond matures.

The issuer makes regular interest payments to the investor. Variations in those rates affect the price of the bond. Bond prices vary with interest rates, falling when rates go up and vice-versa.

The level of impact depends on when you bought and what you bought. The hit for longer term securities is harder than short term securities. Their sensitivity to interest rates – called duration – is much higher. The yield may take a hit, but treasury securities are still a safer investment than stocks.

How long after the curve does a recession start?

The best we can say is that it’s not immediate. Analysts suggest there is an 18 to 21 month period. But that’s a just a projection. The negative curve in August of 2019 was the first indicator. The next came another in December 2019 and January 2020.

A recession officially begins in February 2020. (But not announced until May.) It’s only 7 months from the August curve, not even close to 18 or 21. Was the financial impact of the coronavirus is behind the shortened timeline? It may have been in play in the late months of Q4 2019, but not before.

The definition of a recession is two consecutive quarters of financial decline. The virus was not in play in the during the two prior quarters. Something was happening with the economy back in late summer and fall.

Another interesting data point is the current yield curve. As per Statistica’s chart above, the yield curve is normal. The stock market is also running positive. Despite the highest unemployment numbers since the Great Depression. Despite thousands of business shut down and struggling. The markets seem disconnected from the economic realities.

Should you invest during a recession?

A recession doesn’t need to be a death knoll for your investments. You can adjust your portfolio and purchase some new assets.

Some industries will be harder hit than others – hospitality, entertainment, airlines and retail. They will not recover quickly, and some will not recover at all. Keep an eye out for an opportunity to devest.

But there are industries that are “recession-proof.” Hold on to these stocks, even if they dip. They invariably go back up.

During every economic downturn, there are opportunities in the housing market. Interest rates are low in recession, making mortgages more affordable. There is a never ending demand for housing. Rental properties can be an excellent source of passive income. Also be aware federally-insured mortgage loans (FHA) are available from the US Treasury.

Buying gold or silver is safe but not cheap. Watch for a chance to get in on the lower end. Also consider collectible coins, historical memorabilia or art. These markets are always strong and owning “real property” is reassuring.

Make sure you have access to cash. Put money in a savings account or money market. It’s risk-free and can’t be lost due to market instability.

The most important thing you can do for your portfolio is pay attention. Investors who paid attention in August had 7 months to adjust their portfolios. Those who tried to downplay the negative curve lost a chance to prepare.

A yield curve inversion preceded all 10 recessions in the last 70 years. It is impossible to find an economist who doesn’t recognize it as a prelude to an economic downtown.

Investors can’t stop a recession, but they can be proactive. Even if you hand off the management of portfolio, stay informed about the indicators. A simple Google alert on “yield curve inversion” keeps you updated. If you know what’s going on, you know what questions to ask and directions to take.

Do you want to keep what you have?

You worked hard. Don't let the MBAs take that away. Subscribe now for 100% free business 101 teaching sent directly to your inbox. No spam allowed.

Our best 100% free content only for email subscribers. We never spam. Plus it's against the law.

You must confirm your email address to proceed.

You have Successfully Subscribed!